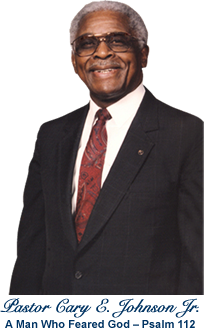 The Reverend Doctor Cary Johnson, Jr., was born June 24, 1929 to the late Mr. and Mrs. Cary Johnson, Sr., in Pasquotank County, North Carolina. There he received his early education in the public school system and later graduated from the P.W. Moore High School. In 1950 Reverend Johnson enlisted in the United States Army and served for 4 years.

After leaving the military, he married the late Victoria Johnson. From that union of 40 years, were born 10 children (14 Grand-Children). While diligently supporting his family, Reverend Johnson pursued the call of God and accepted the pastorate by faithfully serving 47 years as Senior Pastor to the following A.M.E. Zion Church: Rebecca, Pitch Chapel, Beulah Land, Wesley Union, Gabriel Chapel and St. Joseph. During the same period he earned his Bachelor of Science degree in Social Science in 1977 from Norfolk State College. In 1979, Reverend Johnson entered the school of Theology of Virginia Union College, later transferring to the school of United Christian Church of Christ to earn his Doctoral degree in May, 2004.

Reverend Johnson retired from the Federal Government after dedicating 37 years of service to the Norfolk Naval Supply Center and the Norfolk Naval Shipyard. Reverend Johnson actively serves as the Associate minister at Providence A.M.E. Zion Church located in Portsmouth, Virginia. In addition he serves as a member of the Interdenominational Ministers Forum in Portsmouth, Virginia, and serves as Vice President, a member of the A.M.E. Zion Ministers Alliance, and the American Legions.

Rev. Johnson is married to the Reverend Dr. India Johnson of Warrenton, North Carolina. They have been married for 12 years and live in Portsmouth, Virginia.

Above all else, Rev. Johnson is a child of the Most High God. He is dedicated to preaching the gospel of Jesus Christ with boldness wherever he goes. Just like God tells Ezekiel, “Prophesy to these bones (Ezekiel 37:4),” Rev. Johnson preaches to the people a message of hope from the Lord, because the word of God is powerful and, “Will make breath enter you, and you will come to life!” (Ezekiel 37:5). His favorite scripture Matthew 6:33.

Please note we are not holding services at the church until after the COVID restrictions are lifted. Join us for our LIVE STREAM!